We are just 2 guys (Fraser and Dan) from the Oil Capital of Europe- Aberdeen. We started making tracks together a little over a year ago when Fraser needed somewhere to put his monitors. Both of us are super into Trap and Hip Hop, so it felt pretty natural to move into making music inspired by these genres.

Since then things have kinda snowballed and we are getting support from the likes of Patrick Topping and Skream. We are just about to move to Glasgow where we have a Wednesday residency at the legendary Sub Club and have our first physical release planned for the end of September.

Other than the music we are just really into skating and its ethos of just having fun is something that’s integral to our sound. We know what we are about, but don’t take ourselves too seriously we feel this is the best way to approach the industry as it can all be a bit serious from time to time. 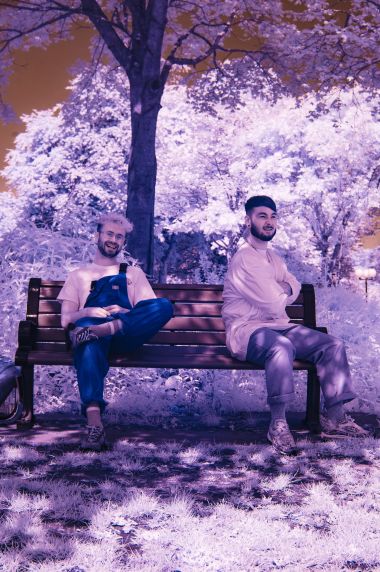 Dan: I think for me it would have to be Kelburn Music Festival. It was super crusty with folk bumping about with healing crystals and shit, but it made the vibe of the event, so that made it special. That and it got up to like 26 degrees which is unheard of in Scotland.

Fraser: Well there are a lot to choose from but I guess its been when I’ve been out and Dan or another DJ has played one of our tracks and just seeing the crowd reaction. Like the energy and knowing that something we made can make so many people happy is just something else.

I think we would both love to go B2B with our boy Deejay Bloom somewhere other than Aberdeen (book us for ur city x). We are the only 2 acts really putting out house music in Aberdeen.

Which came first for you, producing or DJing, Do you prefer one medium more over the other?

Dan: I was into DJing first and really had no knowledge of how to produce until recently. I’d say I prefer DJing but I love being able to make stuff to play in the studio.

Fraser: I first started producing Trap when I was 16 so production is something I’ve always been super into, but I do love DJing so that’s an impossible question (laughs).

What is the music scene like in Aberdeen at the moment?

It’s thriving! We have new record shops opening up, we have a lot more DJs going into production (The best example of this is Milo and Yonas who are now doing a live set) and the quality of bookings has been unreal recently for such a small city.

How would you describe your production style and overall sound?

ts trap mixed with old schoolhouse with a sprinkle of Lo-Fi. Maybe it’s a new genre? Traphouse? I guess that’s up to other people to decide that.